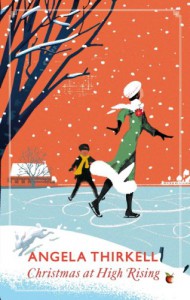 I was mildly disappointed that it wasn't a book of Christmas stories, but only very mildly. Lots of Laura and Tony, which I find hilarious and poignant. The last story has Laura going to London to shop during wartime. I think I mentioned elsewhere that I didn't like Thirkell so much during wartime: she depresses the hell out of me. So Laura is going to London, and the train is cold and other people smoke in the non-smoking car, and there's this enormous list of things they need and the department store where she has long been a customer doesn't have any of those things...and it was depressing as hell, but I was nearly done with the book, so I finished it. And now I am charmed because most prosaic Christmas miracle ever (it's not specifically set at Christmas, but I am highly susceptible to titles apparently).
I may have to reconsider the earlier decision to avoid the wartime books.

And an aside, how beautiful is that cover?