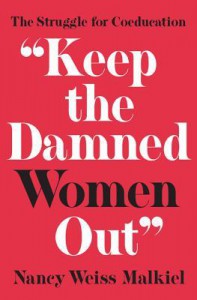 I've already mentioned how deeply angry this book makes me. Stabby, even. It took me forever to get through it with the constant need to put it down and let my blood pressure return to normal.

So, long about the mid-sixties the most elite private colleges in the US and UK discovered decreasing numbers of applications, and a smaller percentage of registrations from the number of successful applicants. High school students were preferring to attend public institutions that were not segregated by gender. Then it kind of became a free-for-all as they each (in the case of the Ivys and most of the Seven Sisters) raced to go coed before one another, so as not to lose too many of their highest-ranked applicants to whichever one got there first.

Some schools managed better than others, but they all bollixed it up somehow. Interestingly, non of the Ivies focused on the idea of fairness, or anything really any loftier than not losing applicants. Not surprisingly, many people had trouble grasping the idea that female college students were primarily interested in a college education for themselves, rather than existing to enrich the environment for male college students. This was less of a problem at Oxbridge where women's colleges existed within the university system already. All the boy schools got tremendous push-back from alumni, most of whom got over their ire when they realized that their daughters or granddaughters could now attend the alma mater. Idiots.

The girls schools got similar push-back from alumna, but had more realistic concerns about loss of leadership roles for women students and employment opportunities for women professors, valid concerns as it turns out. The women's colleges that didn't enroll men in the first wave mostly didn't ever: there remained a market for women-only schools.

Quality scholarship on a topic that just makes me seethe. Highly recommended for anyone with the intestinal fortitude to wade through so many old men being stupid.