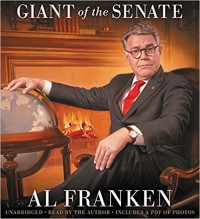 It is terribly important that the most trusted figures in American politics right now are comedians: Al Franken, Jon Stewart, Stephen Colbert. It is important that our newest president has only ever actually been professionally successful as a television character.

Don't get me wrong: I don't think actors, performers, and certainly not writers are somehow less valid as elected officials. While the primary business of senators and congress people is lawmaking, I recognize that they themselves don't (possibly ever anymore) write the laws; federal laws are written by interested parties, think tanks, and congressional staff. So it isn't necessary to be a lawyer in order to shape laws. What is necessary: I think a broad, general interest is good; literacy is useful; the ability to listen is huge; one has to judge sources, because I'm sure there's never less than two sides to any issue, and all of them purport to have data backing them up, of which some must be less valid or useful than others; a willingness to admit ignorance and to learn is key, because no one is an expert in everything, and hastily-formed judgements are unlikely to result in successful solutions to complex problems. And of course, one has to be able to work with many difficult people, but that's true of all work, isn't it? That list of qualities leaves previous work experience pretty open.

It's important that our emperor is naked, and that as many people as possible are pointing at the bare ass he's waggling at us, and laughing. It's not possible to bring him down by arguing with him or fact-checking him: he's a shameless liar, he just makes shit up, most of his shtick is just childish insults. You can't argue with him. He doesn't believe in the idea of a fair fight. But you can point and laugh: he has no defense against mockery.

Franken is a mensch. I would give that man an organ I can't spare, secure in the knowledge that he would use it only for good. He is everything one could hope for in an elected representative, just once I would like to vote for someone who was so progressive and also so pragmatic. Harvard has gone up in my esteem by being Franken's alma mater. If you've never read any of Franken's political books you're in for a treat.